I use Spout in order to send video from Max/Msp/Jitter to Unity
and
from Unity to Madmapper.

Madmapper makes confusion between Spout Max and Spout Unity
If Max is not working, no problem, Madmapper receive the Unity video signal.
When I start Max, Madmapper replace Unity video by Max video.
Senders have different names, I don’t understand.
May be Spout component can’t be used in multiple software at the same time ?

Can someone have an idea please ?
Thank you

I am thinking that MadMapper is changing to the most recent sender started. Is MadMapper OK if you start Max before starting Unity?

Thank you Spout for your answer.

I tried to start Max before Unity, same result, Madmapper takes the Max signal instead of the Unity signal. 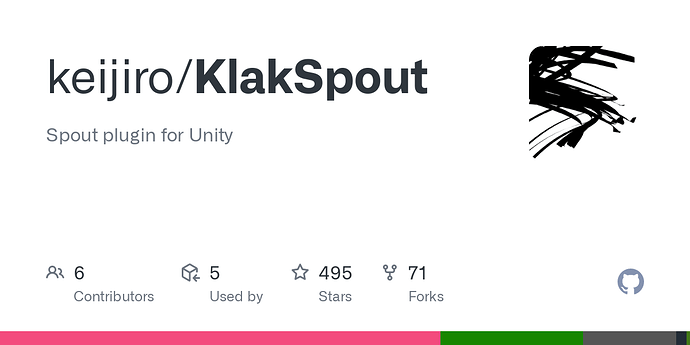 Spout plugin for Unity. Contribute to keijiro/KlakSpout development by creating an account on GitHub.

It’s written that, in a Unity HDRP project, we can use camera view instead of game view to send Unity video signal via Spout.
That’s what I have done, and as I have succession of differents scenes, In Unity I named each Spout sender with a different name for each scene.
It looks like it works properly.

OK. Try this next.

Start Max and a Spout sender.
Start Unity and a sender with a different name, but don’t receive from Max.
Start the Spout demo receiver and RH click to get a sender selection dialog (but don’t select one).
What is the order of the senders. Is Max first or last?

Thanks, I am not sure yet what is going on but have some ideas.

Repeat this and after RH click on the Spout demo receiver, look at the sender selection dialog. One of the senders will be highlighted blue. Which is it, Max or Unity?

Thanks to you for helping me…

The highlighted in blue is the spout of Unity, but it’s spout of Max who appears reversed (Up and down are switched).

In tried with Unity URP project and Camera view spout sender and the behavior is normal, Unity sender is displayed in spout demo receiver.
If I choose RH and select Max, Max sender appears on Spout demo receiver.

In a 3D unity project with gameview as the spout sender there is a problem.
With Klakspout of Keijiro, Camera view sender works on URP and HDRP.

From this I understand that your application is OK as long as you don’t use gameview in Unity.

the texture in Unity display only my Max Spout sender.

The video from Unity display Max demo sender but zoomed.

If I launch Signal from OBS, Unity have no problem to display each differents source.
But Madmapper don’t arrive to display the correct Unity sender.

So, I try in a URP Unity Project because Klakspout allows changing the game view output spout sender for camera sender.

Now the game view in Unity is a black screen, but it send the correct signal to Madmapper.
The spout demo receiver displays black screen when I choose my Max Spout sender.

Yes this is very confusing. I need to repair my brain too because I can’t put this together.

I have an idea for a modification to the Klakspout plugin but have to do some more tests before I suggest it.